INGESOM carries out a technical assistance in a cardboard rolling and gluing machine in a factory in Brazil for the company Control Techniques, world leader in the design and production of variable speed electronic drives for the control of electric motors based in Newtown, Wales. It has dedicated production and R & D delegations around the world, along with automation centers in 45 locations around the globe.
Control Techniques is a company of Nidec, one of the world’s leading manufacturers of drives of various technologies, which are found in a wide variety of applications, such as computers, mobile phones, household appliances, automobiles, manufacturing plants and robots, among others. It has approximately 300 affiliates and 140,000 employees worldwide, and annual sales exceeding 14.7 b $.
The cardboard machine was not well configured, the blade did not cut the pieces according to the measure established by the technicians, so that part of the pieces produced were not suitable for sale, since the stickers did not match the boxes of cardboard where they should be glued according to the specifications of the final customer.
INGESOM modifies the parameters of the program so that the machine has the appropriate configuration and makes the necessary electrical and mechanical adjustments so that the adhesive sheets and the pre-cut cardboard pieces fit perfectly. In addition, all electrical equipment is verified to reduce maintenance problems in the future, reducing possible human errors and facilitating the work to the operators.
With these improvements made the speed in the production line has almost doubled, the number of defective parts have decreased and there are no snags in the production phases. In conclusion, the productivity of the cardboard machine has increased significantly with the consequent increase in benefits for the end customer. 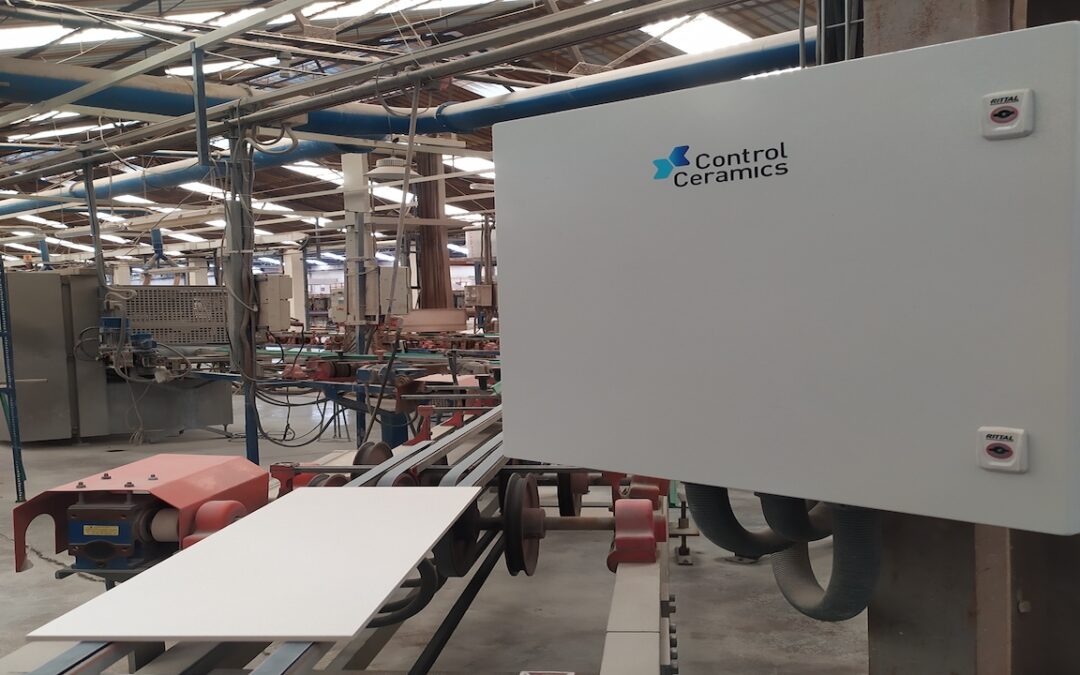 Xarxatec is the Castellón Association of Technology Companies whose objectives are to join forces among companies in the sector, increase the visibility of the province's powerful technology sector and contribute to the development of an entrepreneurial ecosystem.

INGESOM creates a web application that displays the recorded data of a Check Point machine through personalized reports that facilitate the analysis of production according to qualities and defects in the facilities of Todagres, a company founded in 1969 in Vila-real (Castellón), specialized in the manufacture, distribution, and sale of Technical Porcelain tile.

INGESOM modernizes a tiles unloading machine in order to increase its production and significantly extend its useful life, at the facilities of KEROS CERÁMICA, a company located in Nules (Castellón) with more than 40 years of experience in the manufacturing and marketing sector, ceramic floor and wall tiles.

INGESOM adds new humidity and temperature control functionalities to the kit to monitor and control the levels of breathable crystalline silica in the environment, a product specifically designed for any company in the industrial sector that contains free silica in its production process.

INGESOM carries out the retrofit of a sewing machine, in charge of joining the flaps of the cardboard boxes with metallic thread, in order to improve their operation, their production ratios and even the finish of the product. Grupo La Plana is a familiar and independent business group located in Betxí (Castellón), and is dedicated to the manufacture of corrugated and compact cardboard packaging.

You can find out more about which cookies we are using or switch them off in settings.

This website uses cookies so that we can provide you with the best user experience possible. Cookie information is stored in your browser and performs functions such as recognising you when you return to our website and helping our team to understand which sections of the website you find most interesting and useful.

Strictly Necessary Cookie should be enabled at all times so that we can save your preferences for cookie settings.

If you disable this cookie, we will not be able to save your preferences. This means that every time you visit this website you will need to enable or disable cookies again.

This website uses Google Analytics to collect anonymous information such as the number of visitors to the site, and the most popular pages.

Please enable Strictly Necessary Cookies first so that we can save your preferences!